NASHVILLE, Tennessee — Vice Mayor Jim Schulman held the first public meeting to discuss outdoor homelessness in Nashville. The meeting was a first of a two-part public discussion scheduled to continue Wednesday. Over 100 concerned citizens from the community met at the Nashville Public Library to discuss their ideas of possible solutions for the outdoor homeless population in the city. 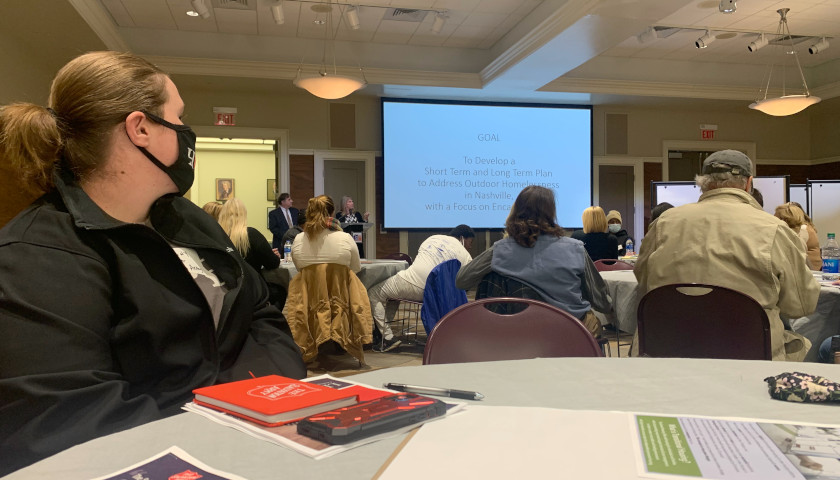 Former judge Patsy Cottrell was the meeting moderator. During her remarks beginning the meeting she said, “You’ve come here because you are interested in helping our community deal productively with the issue of outdoor homelessness, and particularly with encampments of people experiencing homelessness.”

Schulman said that the city has been battling homelessness for many years. “It occurred to me that we don’t have one consistent plan. If you have too many plans and too many ideas, you’re not going to get very far. So the idea was, ‘Why don’t we just call everybody together?’ and then put everybody together at a table… and then let’s talk through it.”

The meeting consisted of people sitting at separate tables to discuss their ideas. Each group was faced with one main goal, to develop a short-term and long-term plan to address outdoor homelessness in Nashville, with a focus on encampments.

During the meeting, it was explained that outdoor homelessness was defined as anyone who would sleep outdoors whether it be under a bridge and an encampment as a structure that someone would build themselves as a temporary place to live.

There were eighteen groups in all, and from each group the goals they each listed were:

The next meeting will be held Wednesday, at the Nashville Public Library at 5 PM. During the next meeting, Schulman said that his goal was to be able to discuss a plan that everyone could agree on.

Morgan Nicole Veysey is a reporter for The Tennessee Star and The Star News Network. Follow her on Twitter. Email tips to [email protected].com