Running right up to the last hours of the 110th Tennessee General Assembly, legislators passed two related immigration bills by wide margins that help the Governor fulfill campaign promises he made during his first run for office.

In 2009, gubernatorial candidate Bill Haslam told voters that if elected, his top priority was to “mak[e] Tennessee the No.1 state in the Southeast for high quality jobs” and that he would work to protect the “values we all hold dear.”

Deterring illegal immigration in Tennessee was a featured part of Haslam’s plan to deliver on these campaign promises: 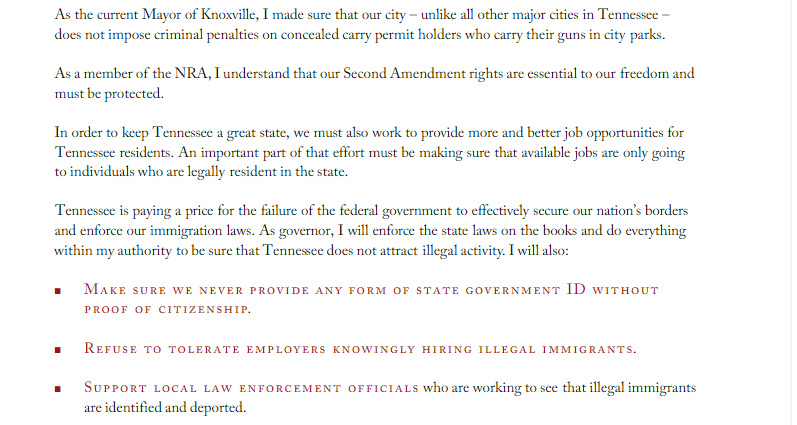 The Green-Reedy anti-sanctuary city bill passed yesterday in the Senate 23 – 5 and in the House 64 – 23, provides clear guidelines for cooperation by state and local law enforcement with federal immigration authorities in identifying and removing criminal aliens which Haslam said he supported during his campaign.

Months before he was elected as governor in 2010, Haslam endorsed the action of a newly Republican majority legislature which passed a bill requiring jailers to contact federal immigration authorities once it was determined that an illegal alien had been arrested.

The Green-Lamberth bill, also passed yesterday by a wide vote margin, prohibits local jurisdictions from creating identification cards, sometimes called municipal IDs, that could thereafter be considered a government issued ID card. Cities in other states have made these local ID cards available to illegal aliens to help them access certain public services and appear as if they are lawfully present.

This bill which passed in the Senate 25 – 3 and in the House 69 – 9, furthers the outcome contemplated by Haslam’s campaign promise that the state would not help conceal a person’s illegal alien status using a state sanctioned identification document.

Immediately after the anti-sanctuary city bill passed, the TN Immigrant & Refugee Rights Coalition (TIRRC) issued an alert distorting the content and impact of this measure, and urging Governor Haslam to veto the bill.

Contrary to claims made by TIRRC, Green and Reedy had noted in presenting the bill in their respective chambers that the bill was supported by federal appellate court precedent holding that it is constitutional to honor federal immigration detainer requests and that the ICE detainers are only issued once it is established that probable cause exists that an illegal alien is subject to deportation.

Once a bill is transmitted to the Governor, he has 10 days (excluding Sundays), to sign the bill, veto it or allow it to become law without his signature.