The Tennessean published a story Friday which claimed “racist incidents are occurring in Williamson Schools.”

The story made specific reference to only one such incident, however, and apparently relied on the word of just two parents to verify that it occurred.

Those parents — Revida Rahman and Inetta Gaines— are both members of the district’s cultural competency council, which “was formed last year by WCS superintendent Mike Looney after parents expressed concerns about field trips to plantations,” according to The Tennessean, which also reported that the incident occured in January at Sunset Middle School in Brentwood when some students at the school allegedly “linked arms in between classes, forming a human chain, and then barred non-white students from passing.”

Rahman and Gaines, both African-American, verified that the wall incident happened at Sunset Middle, along with a number of regularly occurring inappropriate incidents: use of the N-word on school buses, history lessons that glorify slavery and insensitive field trips on the state’s history with slavery.

Gaines, however, according to the Brentwood Homepage, has no children attending Sunset Middle.

“I don’t have a student at Sunset Middle, but I have friends that have students there,” Gaines told The Brentwood Homepage.

The Tennessean quoted Gaines complaining of “racial insensitivity” in the district now and 20 years ago while on a field trip with her son that she said glorified a Confederate soldier.

The cultural competency council Gaines reportedly serves on, “meets with School Superintendent Mike Looney to discuss, among other things, diversity training for faculty and the disproportionate rate of discipline for black students.”

The cultural competency council was formed in January 2018, and some time subsequent to that Williamson County hired a full time diversity officer,  sources tell The Tennessee Star.

According to Looney, “In August, the district began a yearlong training session on cultural competency, which included professional development for teachers,” The Tennessean reported.

According to the Tennessee Department of Education (TDOE) website, “In-service days shall be used according to a plan recommended by the local superintendent of schools in accordance with the provisions of this section and other applicable statutes, and adopted by the local board of education. A copy of this plan shall be filed with the State Commissioner of Education on or before June 1 the preceding school year and approved by him.” (emphasis added)

“Tennessee is a state that believes in local authority, so the content of inservice trainings is decided upon at the local level. For more information you should contact Williamson County Schools,” TDOE spokesperson Chandler Hopper told The Star.

Among the key points included in the in-service video for Williamson County teachers were the following:

You can watch the complete 26 minute video here:

The Tennessean story did not quote any Williamson County School officials corroborating that the alleged Sunset Middle School “linked arms” incident took place as the parents who went on the record with the paper described it.

As for the district as a whole, The Tennessean reported that parents said “insensitive and racist incidents are a regular occurrence, and they are asking the district to do more to make it inclusive for all students.”

If the paper spoke with any other parents about the other alleged racial incidents then those accounts were apparently obtained off-the-record.

As The Star reported, two Sunset Middle School teachers resigned on Tuesday after they had earlier in the month handed out an assignment asking students to imagine they were slave owners and to identify the expectations they would have, as slave owners, for their slaves. Superintendent Looney held a meeting with what The Tennessean called “the inclusion committee” on Tuesday night at which that assignment was discussed. The meeting was closed to the media. Shortly after that meeting ended, Williamson County Schools announced that both teachers who had handed out the slavery assignment had resigned.

On Friday afternoon, the story took a strange twist.

Among the documents given to The Star along with the two CDs was a document that The Star had not requested in its open records request. That document, which appears to be a printout of an email sent to Williamson County Schools director of communications Carol Birdsong from the reporter at The Tennessean who wrote Friday’s story, appears here below: 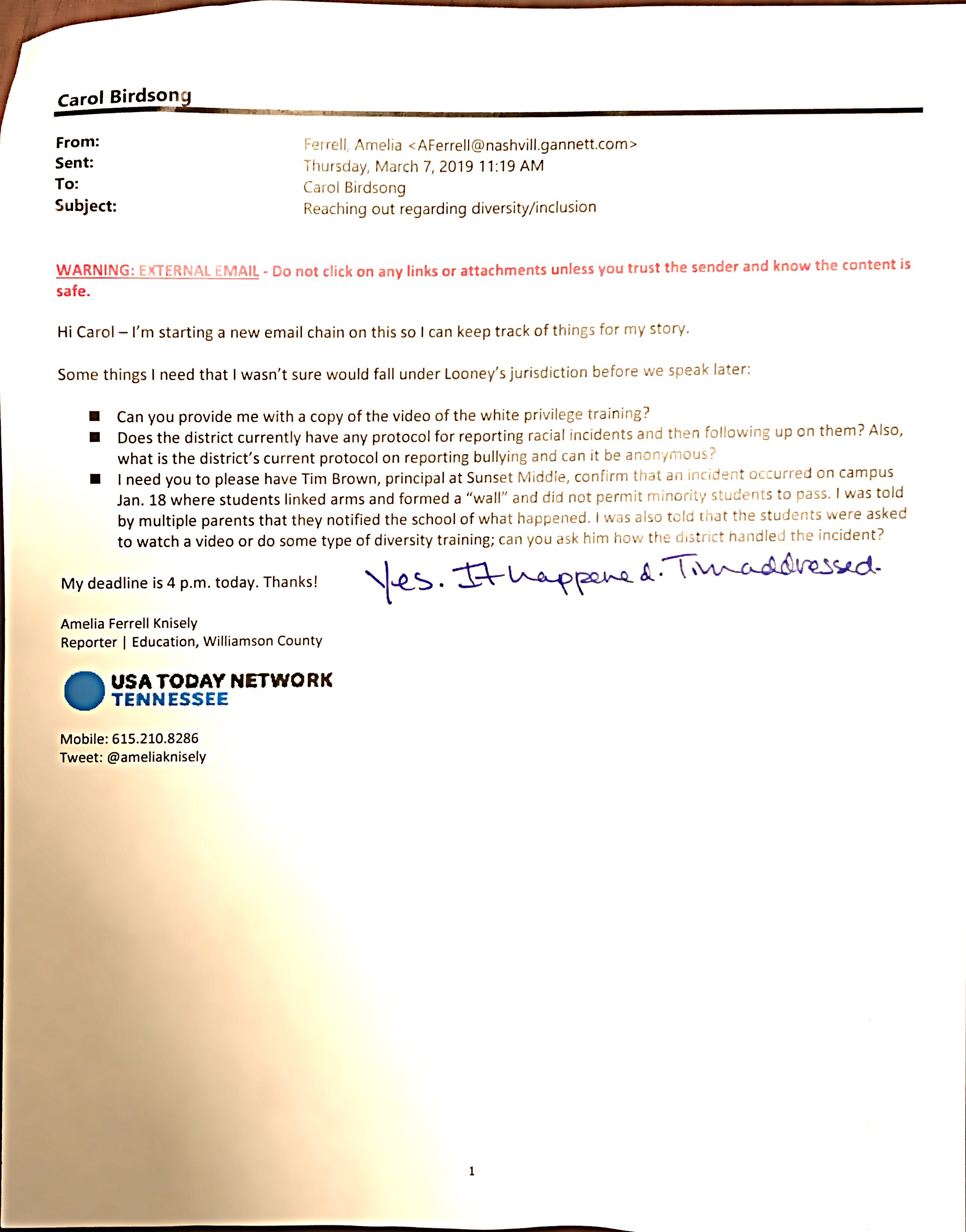 Subsequent to reviewing the document, The Star confirmed with Williamson County Schools director of communications Carol Birdsong that the handwriting at the bottom of the document, which states “Yes. It happened. Tim addressed,” was hers.