Members of the Democratic Socialists of America have endorsed three candidates for the Knoxville City Council, apparently as part of a movement to get candidates elected in states that support U.S. Republican President Donald Trump. 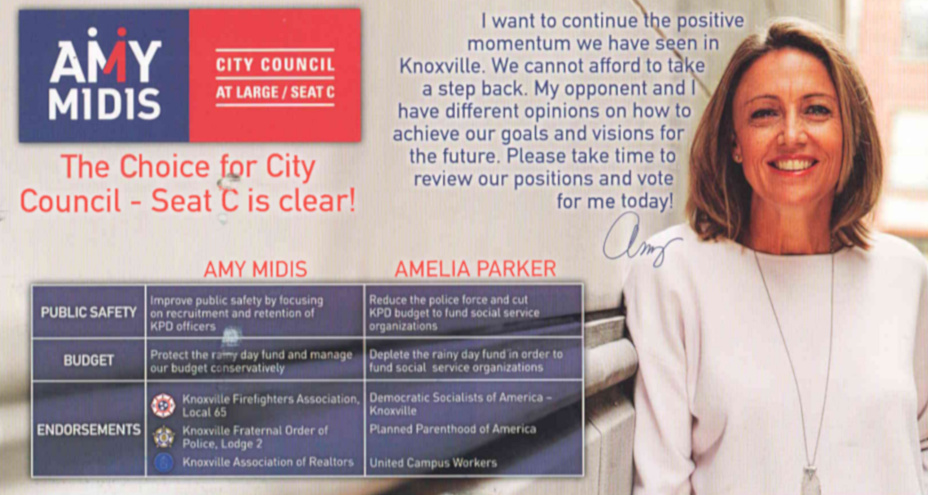 The election is scheduled for Tuesday, Nov. 5.

According to Yahoo Finance, “America’s socialists reckon they’re on a roll” and are running locally in Trump-friendly states.

“The movement has long been confined to the fringes in U.S. politics, and also on the map. It’s associated nowadays with hipster enclaves of the West Coast, or New York — where the country’s most famous socialists are teaming up on Saturday, when Representative Alexandria Ocasio-Cortez will endorse Bernie Sanders for president at a rally,” according to Yahoo Finance.

“But now it’s spreading across the Rust Belt, Midwest and South. At least 60 branches of the Democratic Socialists of America, the most prominent among a bunch of reinvigorated leftist groups — have sprung up in the past year, mostly in conservative areas where President Donald Trump did well with voters.”

According to RouteFifty.com, these DSA-endorsed candidates win elections by “running on platforms that reject capitalism and promote working class interests.”

“The dividing line between DSA candidates and progressive Democrats can be blurry at times. The socialists on city councils interviewed for this piece all framed it as an ideological, if not practical, difference: a rejection of capitalism as a system that must be protected, and a refusal to ‘tweak the system around the edges,’” according to the website.

“That echoes the rhetoric of prominent DSA leaders like Ocasio-Cortez, who has called capitalism ‘irredeemable.’ It’s also a direct contrast to Democrats like House Speaker Nancy Pelosi, who in 2017 said that “[Democrats are] capitalists, that’s just the way it is.”

The website went on to quote University of Houston law professor Kellen Zale, who said DSA-endorsed councilmembers are in a better position to accomplish their policy objectives than people elected at the national level.

RouteFifty.com also said DSA-endorsed candidates have had success in Chicago, Denver, and Georgia.