NASHVILLE, Tennessee – Ten members of the Tennessee House of Representatives last week participated in a “Spend a Day in My Wheels” Challenge.

The challenge to use a wheelchair as lawmakers moved about the Cordell Hull Building was arranged by State Representative Clark Boyd (R-Lebanon), he told The Tennessee Star, and was the result of a young man in his district who relies on a wheelchair for his mobility. 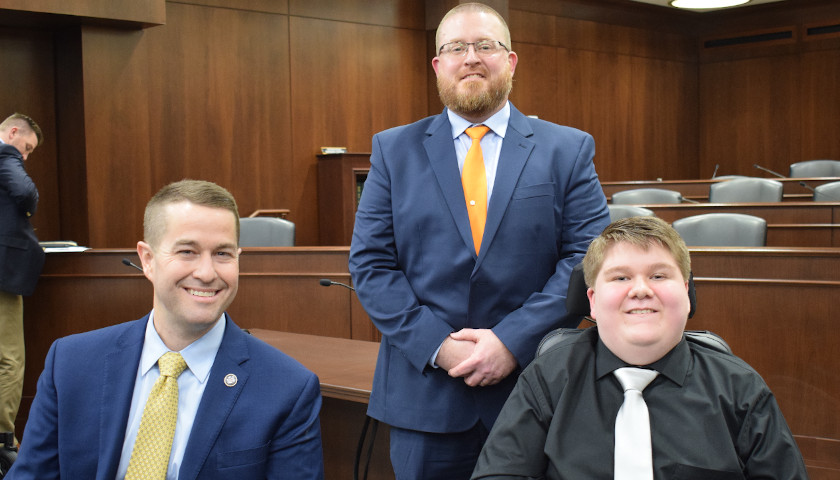 In support of the challenge, wheelchair developer, manufacturer and marketer Permobil, also with a location in Representative Boyd’s district, provided the wheelchairs to the participating House members.

The idea is to create awareness of the challenges encountered by those who rely on wheelchairs as they seek to engage with the public.

Representative Boyd announced to members on the House floor during Monday evening’s session that nine colleagues had agreed to take the challenge with him and that the young man who initiated the challenge would be in House Hearing Room I the following day. At that time, challenge originator Alex Johnson would make a few comments and be taking group photos.

Throughout the day of the challenge, several House members could be seen in the hallways in their newly-adopted wheelchairs, making their way to various locations in the Cordell Hull Building.

During that day’s Naming, Designation and Private Acts Committee meeting, Representative Susan Lynn (R-Mt. Juliet) asked Committee Chairman John Mark Windle (D-Livingston), who rolled into House Hearing Room III to explain what it was all about.

Chairman Windle said that so many Americans are affected by disabilities and went on to encourage Committee members “to take a moment to reflect on the challenges that our fellow Americans have that are confined to a wheelchair or have severe disabilities, because most of us, including me, take our health for granted.”

Many times, I’m afraid that we overlook those with disabilities and don’t make enough accommodations for those people, especially those that are out trying to interact with the public and trying to get through the travails of everyday life. So, I would encourage each of you to at least consider that as you go through your daily life and also keep in your prayers.

It’s certainly an eye-opener to be in a wheelchair for a day and I would encourage each of you to at least be cognizant of those who are not as fortunate as we are to have the use of all of our limbs.

According to the news release by Representative Boyd, challenge brainchild’s Alex Johnson is a 14-year-old eighth grader at Friendship Christian School in Lebanon.

Johnson, who has a rare skeletal disorder leaving him initially dependent on a walker and then a wheelchair from an early age, came up with the challenge idea in fifth grade to help his able-bodied classmates experience the world from his perspective.

“My challenge gives people a real-life perspective of the difficulties wheelchair users face on a daily basis. My hope is that through my challenge we can make the world more accessible,” said Johnson.

Representative Boyd said of Johnson, “He’s an amazing young man who has found a way to use his disability as an ability to educate others.”