Tennessee Stands held a “Mask Free Tennessee Rally” Saturday on the Public Square in Franklin. A similar rally was held Sunday in Knoxville by No Mandates Tennessee.

Tennessee Stands organizers on Saturday evening posted on their Facebook page, “So thankful to all of the patriots that showed up today for the Mask Free Tennessee Rally today in Franklin! Our voices are louder together. We will not give in to the mob. We will not relinquish our liberty. We. Will. Not. Comply.”

On Friday, leading up to the protest, Tennessee Stands posted on Facebook, “We have had enough of unlawful and unconstitutional orders. Williamson County is now under a mask mandate through the end of the year thanks to Governor Bill Lee and Mayor Rogers Anderson. We. Will. Not. Comply.” 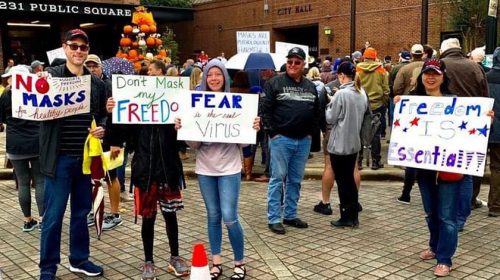 The group’s website says, “Tennessee Stands is a nonprofit social advocacy organization that serves to protect the individual liberties of all Tennesseans as stated in the Tennessee State Constitution and given to us by God.”

Citizens for Limited Government and Constitutional Integrity, Inc. doing business as Tennessee Stands filed a lawsuit in August against Lee, The Tennessee Star reported at the time. The suit was based on the grounds that the state statute deeming the governor’s executive orders have the full force and effect of law is unconstitutional.

The other event held over the weekend, the “Knoxville Freedom Rally,” billed itself as people gathering to “raise our voices together in protest against mask mandates, social distancing, unelected boards controlling the actions of Tennesseans, and the possibility that any Tennessee state legislators will write, sponsor, or vote for any proposed mandatory COVID vaccine bills.”

Jason M. Reynolds has more than 20 years’ experience as a journalist at outlets of all sizes.
Photos “Mask Free Tennessee Rally” by Tennessee Stands.

11 Thoughts to “Citizens Groups Hold Rallies in Franklin, Knoxville to Declare ‘We Will Not Comply’ With Mask Mandates”