The grassroots organization America Pack put on its last Republican primary debate Friday night, featuring the candidates for Arizona Secretary of State followed by the candidates for Arizona State Treasurer. During the first debate, Secretary of State candidate and current State Senator Michelle Ugenti-Rita (R-Scottsdale) took an aggressive stance toward her opponents, and her fellow Republicans responded in kind.

During the second debate, State Representative Jeff Weninger (R-Chandler) went after the sitting treasurer, Kimberly Yee, who responded back just as feistily.

State Representative Mark Finchem (R-Oro Valley) and State Representative Shawnna Bolick (R-Phoenix) are the other two candidates running for Secretary of State. Finchem, who is endorsed by Donald Trump, sponsored a bill to reject the results of the 2020 election in three counties in Arizona, HCR 2033, and led efforts to conduct the independent Maricopa County ballot audit of that election. Bolick has also led on election integrity issues, recently arranging a forum for True the Vote to speak to the Arizona Legislature about their investigation that resulted in the documentary 2,000 Mules, and has come up with a Roadmap to Restore Election Integrity.

Ugenti-Rita began attacking the other two candidates immediately, stating that she was the only one who pushed for tax cuts the night before dealing with the annual budget. Bolick, who arrived late due to her duties at the state capitol, told The Arizona Sun Times afterward that she sponsored Senate Bill (SB) 1116, to end the residential rental tax, which State Senator Paul Boyer (R-Glendale) killed in the Senate. Ugenti-Rita touted her record championing numerous election integrity bills as a qualification and was the only one of the three who got one passed this session, but she also voted against several. 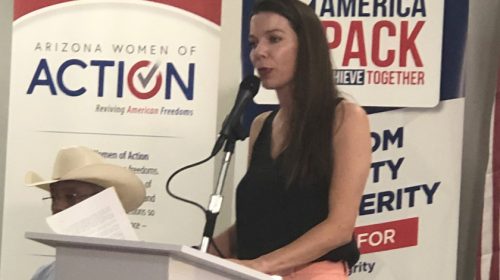 Ugenti-Rita came back and criticized him for holding a hearing with Rudy Giuliani investigating election fraud immediately after the November 2020 election. “Nothing happened after the hotel room,” she accused.

She also said he “pushed an idea that’s not even constitutional,” referring to HCR 2033.

Finchem said the latter wasn’t true, the failed bill would merely set aside the election, it doesn’t de-certify. He said the constitution doesn’t prohibit that; “unenumerated powers are reserved to the states,” it’s the states’ rights to manage elections. The legislature is responsible for “time, place, and manner of elections, not the courts.”

Ugenti-Rita retorted that HCR 2033 was “a postcard to Congress” that “just enumerates your complaints, it doesn’t undo something, it’s just a list of grievances.” She continued her rant, “The problem is people misleading the public with false expectations.”

Finchem came back at her, “Intellectual dishonesty is a terrible thing.” He relayed how he championed legislation to provide for secure ballots that would allow voters to track their ballots after casting them on the internet, without allowing the ballots to be traced back to them. 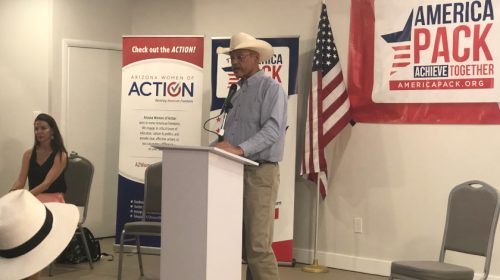 Bolick said her top priority would be cleaning up the voter rolls, starting election integrity task forces in each of Arizona’s 15 counties, and after a law is passed requiring legal ID to vote, enforcing that law. She said she would hold town halls around the state to start the process of decentralizing the office.

Finchem said he would make the office responsive to people since right now there is a lack of response to emails and phone calls from the public. Complaints would be sent to the Arizona Attorney General’s Office instead of being ignored.

Ugenti-Rita attacked Bolick, “She openly admits she will violate the law,” referring to Bolick stating she would have delayed certification of the 2020 presidential election due to the problems that arose. Bolick responded and said pausing the certification was not a violation of the law.

The candidates were asked their thoughts on the controversy between Arizona Attorney General Mark Brnovich and Hobbs regarding Hobbs’ refusal to make Brnovich’s instructed changes to the state election procedures manual (EPM). Finchem said the problem is Hobbs is trying to put policy into the EPM, which intrudes on the legislature’s job; her job is to deal with the procedure. He said the EPM should also go to the legislature for review.

Ugenti-Rita said she’s pushed back against Hobbs’ abuses with a bill providing legislative oversight of the EPM and she has also tried to stop Hobbs from counting ballots without signatures. She would open the EPM up for collaboration with public input. Bolick said she introduced a bill to clarify that state law takes precedence over the EPM. She accused Hobbs of trying to push the Democrats’ federal election bill HR 1 into the EPM. She educated herself about these kinds of issues by submitting a public records request to Arizona county recorders for comments submitted to them by the public.

Both debates were moderated by KTAR talk show host Mike Broomhead. The treasurer’s debate included Bob Lettieri, who has over 30 years of experience working as a CFO, raised over $100 million in the capital markets, and served as treasurer for the Arizona Republican Party. He said his extensive experience in corporate financial management “differentiates me enormously from politicians running for the job.”

Weninger said he was qualified due to eight years in the legislature and almost 30 years running two successful restaurants, Floridino’s and Dilly’s Deli, which avoided any layoffs during COVID-19. In a subtle dig to Yee, he noted that 25 state legislators have endorsed him. 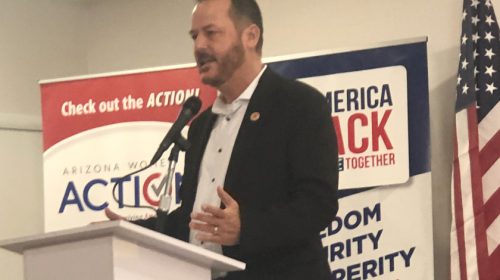 Yee discussed her record as treasurer, divesting $143 million in state funds from Ben & Jerry’s (which is now owned by Unilever), the first state to do so in the country, due to their boycotts of Israel’s settlements. She boasted that the treasurer’s office has seen performance measures not yet seen by any other treasurer, and said she tripled the investment in Israeli bonds. Yee said she was an early supporter of Trump, appearing with him at a rally during the 2016 primary.

She responded to Weninger’s dig by pointing out that some of his endorsements happened when she had initially decided she was not going to run for reelection. She then stated that her platform is “honesty and integrity” in a jab back at him, and added another dig referring to his lack of a college degree, “You need a college degree for this position.”

Weninger responded by pointing out that some of the endorsements on her website should be taken down, including Rep. Andy Biggs (R-05-Ariz.) and former Gov. Jan Brewer, who have endorsed him in this race, even if they endorsed Yee in previous races. He defended his lack of a college degree, “I got right to work and I built a business,” to thunderous applause. He explained that Yee’s office lobbied the legislature for a law that would prohibit people without a degree from becoming treasurer, which he found “an abuse of power.”

All three candidates agreed that renewing banking services with Bank of America would be looked at skeptically, due to its refusal to do business with gun companies and fossil fuel companies, known as ESG (environmental, social and governance responsibility), or “woke capitalism.” Weninger said he sponsored a bill that would have prevented the state from doing business with companies that discriminate against gun companies. He pointed out that Yee did not send anyone to the legislature to lobby for it.

Weninger went after Yee for allegedly not showing up very often at the office. He said a public records request found that she had only checked in with her key card to the office six times between November 2021 and April. He said one of his priorities would be to bring both the treasurer and staff back to the office. 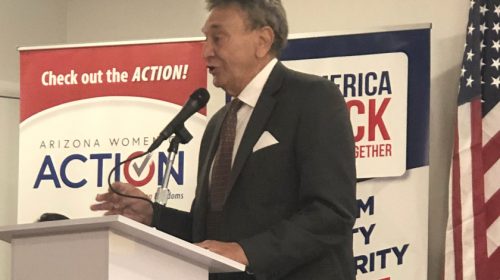 Yee explained that she doesn’t always use her key card to enter the building; sometimes a staffer is walking with her and uses theirs instead. She said the logs would show that she was physically in the office much more often than the key swipes. She explained that some of the staffers are traders, who start their day at 3 a.m. when the stock market opens in New York City, so they start their day at home.

She took offense to Weninger’s criticism of the Bank of America contract and possible renewal, stating that the initial contract was signed under a previous treasurer and she works with Second Vote, an organization that rates how woke companies are. She said she’s inserted questions into the contract process to ensure the bank that gets the contract doesn’t discriminate — and she’s adding pro-life organizations to that protection. She took another dig, “We need someone in office who hasn’t just heard of ESG.”

Lettieri laid out his agenda, which would be getting to know the staff, providing them with objectives, and holding them accountable. He said credit card companies are starting to implement social scores, which means they cut off your credit once you’ve spent too much money on items leaving a carbon footprint. He would maximize shareholder value, not maximize the woke agenda.

Arizona’s primary election is on August 2.