Outgoing Gov. Doug Ducey ordered gaps in the wall on the U.S.-Mexico border patched using shipping containers earlier this year, but protesters are now blocking workers from finishing the project. At the same time, the Biden administration hit Arizona with a lawsuit also attempting to stop the construction.

Arizona Attorney General Mark Brnovich, who has taken on the Biden administration numerous times over its inaction on the border, vowed to defend the state in court, hinting that he would not be cowed into a settlement. “President Biden says there are more important things to talk about than the border, yet his DOJ is suing to immediately tear down our crowd control structure,” he tweeted. “Once again, we’ll see you in court.”

The Biden administration has gone back and forth with Ducey over the wall since August. Ducey issued an executive order on August 12 ordering gaps filled in the wall located along Yuma County. Ducey decided the construction was necessary after a record number of illegal immigrants crossed the border in 2022, 37 percent more apprehensions than last year, and the Biden administration rescinded the Remain in Mexico policy.

When Ducey applied for a permit in September from the U.S. Forest Service to start construction, the agency turned him down. The Biden administration demanded Arizona stop construction in October. Arizona turned around and sued the government for interfering on Oct. 21. 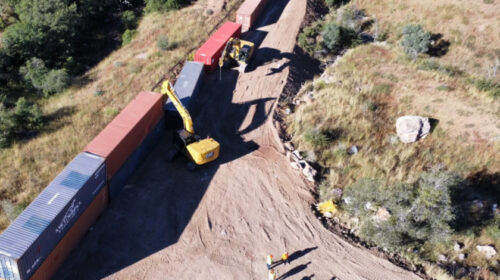 On Wednesday, the Biden administration filed a lawsuit against Arizona over the wall. The lawsuit claimed Arizona doesn’t have the proper permits or authority, and accused the state of trespassing on federal land.

Demonstrators brought tents and placed them next to the construction in Cochise County this month, enduring snow and below freezing temperatures to successfully block the construction. There are about a dozen protesters, consisting of environmentalists and nearby residents. They sat on top of the stacked containers or in camp chairs near tents and vehicles where they sleep.

While environmentalists claim the wall is bad for animals and plants in the area, Yuma County Sheriff Leon Wilmot disagreed recently, stating, “The containers were placed in the areas needed due to agricultural concerns impacting local farmers, and to help stop the environmental impacts we were experiencing along the river corridor.”

The project started in Yuma County in August and expanded into Cochise County, where 3,000 steel containers are being installed. The Yuma section cost $6 million and spanned 3,600 feet.

The containers filled areas left open when Trump’s 450-mile border wall was built.They are stacked 17 to 22 feet high and topped with barbed wire.

Arizona has had more difficulty than Texas building a border wall since most of its land by the border is on federal land, unlike Texas where it’s substantially private property.

In August, Ducey explained the need for the gap-filling project in a statement, “The Yuma border wall gap is a notorious opening in United States border security through which thousands of migrants and an unimaginable number of lethal narcotics flow through every day. … Nonprofits and shelters in Yuma County that assist migrants have been over capacity for months, with capacity ranging from approximately 115 to 160 percent.”

He included remarks from Yuma Mayor Doug Nicholls, who warned, “The Yuma community does not have the infrastructure to handle thousands of people crossing the border in need of food, shelter and medical services.”

Arizona Secretary of State Katie Hobbs, who will become the next governor in January if Kari Lake’s attempts to challenge the election results are unsuccessful, has said she intends to halt the construction. However, she has not said she will remove the existing structures. Lake campaigned on a promise to dispatch the National Guard to the border on her first day in office.

Rachel Alexander is a reporter at The Arizona Sun Times and The Star News Network. Follow Rachel on Twitter. Email tips to [email protected]
Photos “Wall of Containers” by Gov Doug Ducey.