A Georgia police officer has resigned after he was told by superiors that he could not share his personal religious views on social media.

“If someone somewhere considers an opinion I have—that isn’t a direct quotation from Scripture—to be offensive, then that would be a fireable offense,” Jacob Kersey, the former officer, told The Daily Signal.

Kersey, 19, who began working last May at the Port Wentworth Police Department in a jurisdiction just outside Savannah, says “everything was going well” until the start of the new year.

On Jan. 2, Kersey posted a 20-word message about his view of marriage on Facebook.

“God designed marriage. Marriage refers to Christ and the church,” he wrote, paraphrasing the Apostle Paul’s teaching in the Book of Ephesians. “That’s why there is no such thing as homosexual marriage.” 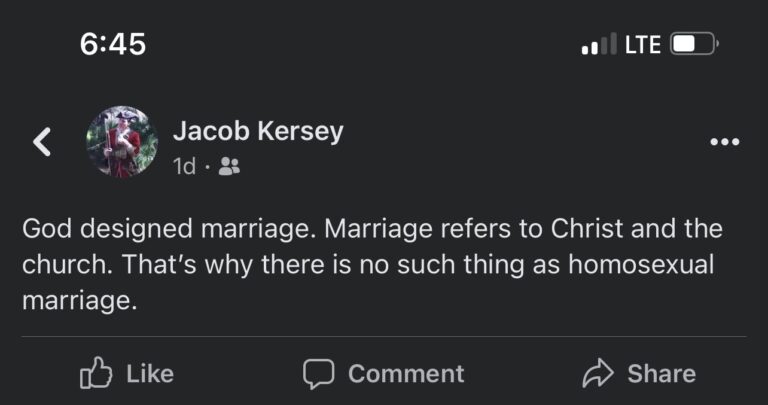 The next day, Kersey said he received a phone call from his supervisor, who told him that someone had complained about the post and to take it down.

When Kersey refused, the supervisor warned him that failure to delete the Facebook post on marriage could result in his termination.

Kersey said he then was contacted by Lt. Justin Hardy, who  told him that the Port Wentworth Police Department didn’t want to be held liable in a “use of force” situation involving someone in the LGBTQ community. Kersey still refused to delete the post.

The police officer received a phone call later that day from the police department’s Maj. Lee Sherrod, ordering him to come to the office the following morning, Jan. 4, and turn in everything he had that belonged to the city.

Kersey told The Daily Signal that he believed he was going to be terminated. 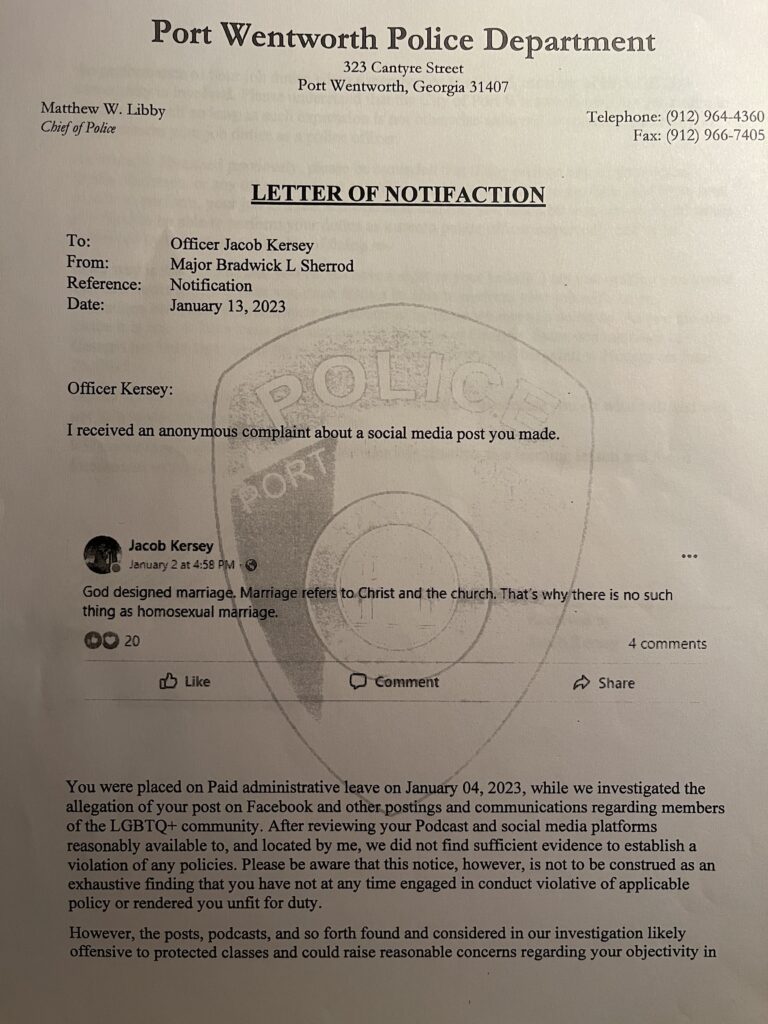 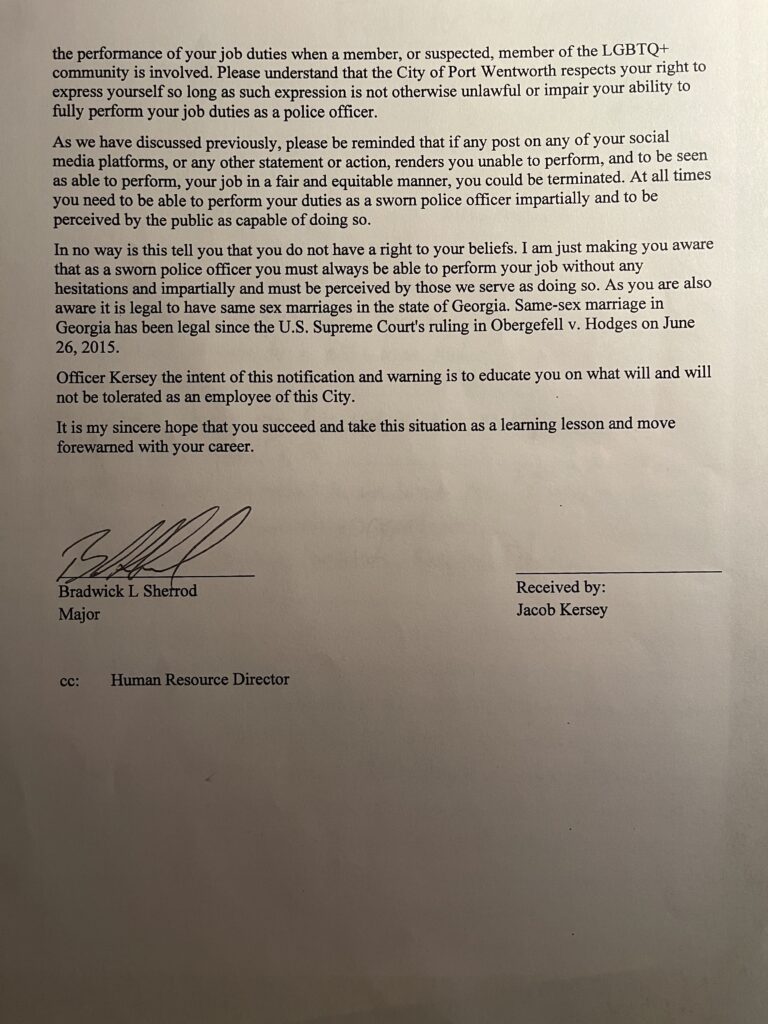 When he arrived at the police station, the young officer met with Sherrod, Hardy, Capt. Nathan Jentzen, and Police Chief Matt Libby.

He was told that he was “being placed on administrative leave while the city investigated to see if I could keep my job,” Kersey said. “I was told that I was wise beyond my years, an old soul, and that they brag on me all the time, but that I couldn’t post things like that.”

The Port Wentworth Police Department, which serves a city with a population of just under 11,000 in 2020, did not respond to The Daily Signal’s request for comment.

After a week of paid administrative leave, Kersey met again with the leadership of the police department. He says he was informed that he no longer was on administrative leave and would not be fired, but that he could not share opinions on social media that could be considered offensive.

Kersey says he was told he could post Scripture verses, but could not work as one of the department’s officers if he continued to share his “interpretation or opinion on Scripture if it was deemed offensive.”

“Separation of church and state” was the reason given for why he could not post such views, Kersey said.

Kersey said police officials told him that they were developing a new policy to guide officers on what they were and were not allowed to post on social media.

Next, Kersey received a “letter of notification” from Sherrod dated Jan. 13. The letter explained that although Kersey is entitled to his own personal beliefs, he should be “reminded that if any post on any of your social media platforms, or any other statement or action, renders you unable to perform, and to be seen as [unable] to perform, your job in a fair and equitable manner, you could be terminated.”

Four days after the date on the letter, on Jan. 17, Kersey formally resigned from the Port Wentworth Police Department.

“I decided to resign … because I just didn’t think it wise to go back and play their game,” Kersey told The Daily Signal, adding that “the way things went down, I didn’t feel as if my command really had my back.”

Looking back, the former police officer says he felt he was being bullied, through the fear of termination, into taking down his Facebook post:

Even though I resigned, it was made clear to me in the meetings by my command staff that if I was to go back to work, they could fire me at any time for any reason, as I was still in my work test period. Those aren’t very encouraging statements to make to an officer who is on administrative leave after being led to believe he was terminated.

The surprising thing, Kersey said, is that despite having his own Christian conservative podcast for years on which he discussed issues such as gender ideology and election reforms, it didn’t lead to “people complaining about things that I said when I was off duty on my own time on the podcast.”

“I’m sure people disagreed. I’m sure people didn’t agree with everything that I said as a conservative Christian, and that’s fine,” Kersey said of his podcast. “But I came to work, I did my job, I was professional, and I had a great relationship with all my co-workers, who come from all different backgrounds and belief systems.”

As a boy, Kersey said, he grew up in a broken home and often saw police officers amid his parents’ custody battle. When officers arrived, “they brought order, they brought peace,” he recalled, adding that many officers “went above and beyond the call of duty” to talk to him and offer encouragement.

“I wanted to spend some time of my life learning what that meant to serve and to follow in the footsteps of people who invested in my life at a young age, and I was extremely excited about doing that,” Kersey said. “But it seems, at least at that department that I was working at, that the only way that was possible is if I compromise my values, morals, and deeply held religious beliefs.” 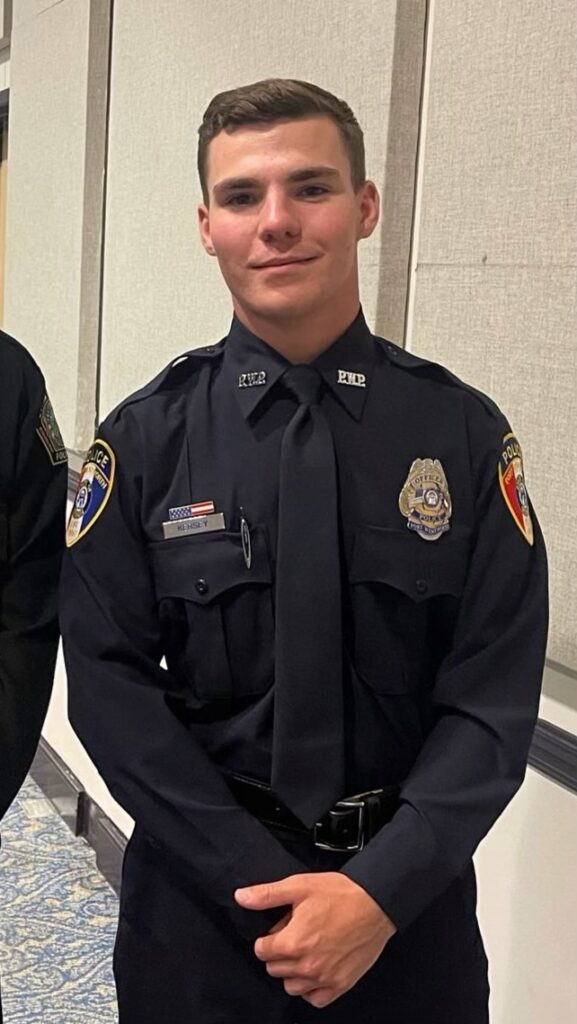 “I am grateful for the opportunity that I was given to be a police officer,” he said. “I do not take that honor and responsibility lightly. However, my integrity and Christian beliefs are at the core of who I am, and I will not abandon them.”

Although he is confident of finding other work, Kersey said, he knows that a long-time officer with a family to support, put in a similar situation, would be faced with the choice of “losing everything that they ever worked for, and their retirement, or standing up for their beliefs.”

He isn’t sure what is next for his career, Kersey said, but he doesn’t “want to be the man that sits passively by as the whole world, and my fellow countrymen, are deceived by the lies …  happening in [the] culture.”

His decision to share his story “could very well mean I will not have another opportunity to be a police officer,” Kersey told The Daily Signal. “That has been an extremely difficult reality to accept, but I sincerely believe speaking up is the right thing to do.”