Governor Haslam appeared nervous and off his game Monday night, as he was peppered with questions he could not answer at a “gas tax town hall” tour stop at the Franklin County Annex Building in Winchester.

After giving 30 minutes of opening comments to the standing-room-only crowd of about 150 people, the governor opened the meeting up to questions and was challenged for the next 45 minutes with more than two dozen questions critical of his proposal to raise fuel taxes. 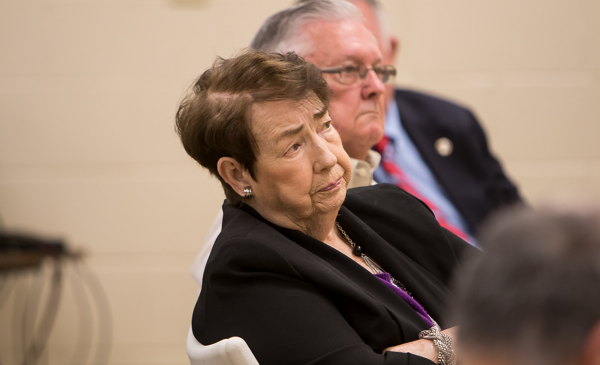 The first questioner contrasted the 7 cents per gallon gas tax and 12 cents per gallon diesel tax increase with the half-percent reduction in the grocery sales tax contained in the governor’s plan.

The questioner pointed out that the two things that have strapped everyone are groceries and fuel. The fuel tax increases will offset any grocery tax savings, the questioner stated.

The governor then went through his math to assert that his proposal represents a 4 cent increase per $100 purchased in diesel fuel,  but the man who posed the question found that arithmetic unsatisfying. He sat down,  shaking his head.

County Commissioner Dave Van Buskirk asked if the money will only go to roads.

Gov. Haslam said that currently two percent of fuel taxes goes to the state’s general fund, but the bill will say the only places the full two percent can go is to road projects. This, the governor said, will be true to the user fee principle upon which his proposal is based.

Cody Bucher, chairman of the Franklin County Libertarian Party, started a back and forth with the governor that left many in the audience feeling Bucher won the exchange.

Bucher began by stating he was in favor of consumption based taxes. He asked how the governor’s plan fits with the Hawk plan. 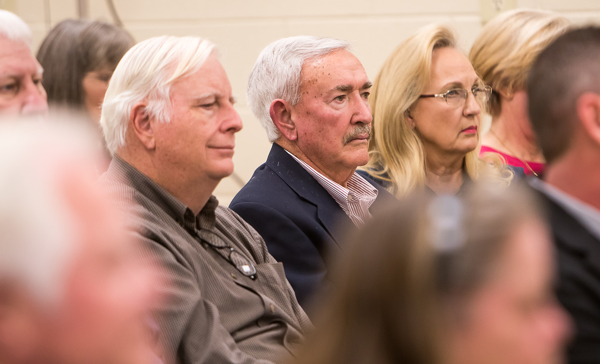 Gov. Haslam explained the Hawk plan would take one quarter percent of the sales tax revenues to apply toward roads, and “the beauty, the good part of that plan is that it would be taken from the existing budget and we wouldn’t have to raise anyone’s taxes.”

It was a stunning admission for the governor, who this past Friday in Knoxville claimed that there were no alternatives to his gas tax increase proposal to fund road construction.

“Using sales tax from the general fund will mean that we will probably have to do away with the tax cuts that I proposed and some other things like teacher salaries or something else,” said Haslam.

The governor continued, stating that the sales tax is paid 90 percent by Tennesseans and, by his math, about half of the fuel tax will be paid by either out-of-state drivers or trucking companies.  Transportation, with a $10 billion backlog, could quickly consume the general fund budget, he said.

There are revenue neutral options even for the budget cuts, he told the governor.

He asked if the governor was saying he is going to raise taxes and simultaneously decrease taxes.

“Yes, because there are two separate funds.  We have a surplus in our general fund, which is how we traditionally pay for everything except roads, and our road fund that has a shortage.  If we are going to keep the two distinct, we need to address it,” Gov. Haslam answered.

Bucher went on to question why there should be two separate funds, not one bucket of money,  when it is the politicians  who set the rules and who do the allocation.

When asked how much of the sales tax is unallocated, the Governor said he has a budget that allocates all of it. He added that he is required to propose a balanced budget every year.

The Tennessee Star’s Kevin Baigert asked the governor to comment on the issue of revenue volatility, noting that any revenue source is volatile and that the gas tax took a downturn in 2008, probably along with tourist dollars. 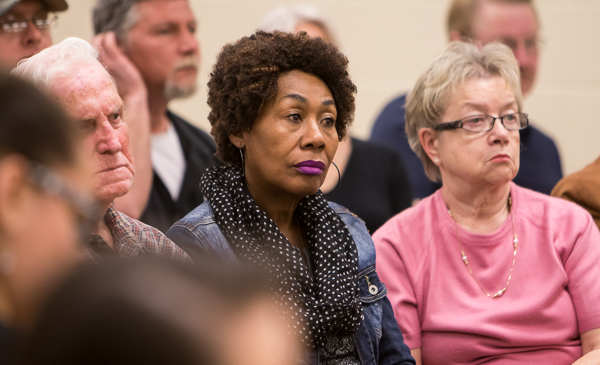 Gov. Haslam admitted the point about volatility is a really good one, and that virtually all governors are dealing with the same thing.

A fireman proposed that $100 million could be given to the 95 counties for rural water lines and fire hydrants that would last 75 to 100 years, versus the ten years for asphalt paving.

Gov. Haslam said there was no shortage of ideas , and that eventually money would have to be taken out of the Franklin County general fund.  To get the same $800,000 to the county, with help from the Mayor, it would take a 10 cent property tax increase, he said.

One man asked the governor if it was economically irresponsible to propose a gas tax increase. He also wanted to know how much revenue it will raise.

The governor replied that $270 million will go to the state.

The man persisted, referencing the miscellaneous appropriations section of the budget, “under grants and subs 713” to which there was an increase of $126 million this year, which is about half of the $270 million that will go to the state.

The governor said he would look into it, but he just doesn’t know it well enough.

Another woman wanted to know who the $270 million in tax cuts went to and asked the audience to raise their hands if they paid the Hall income tax.

When not too many hands went up, she stated that a few got a big tax, cut but that the 7 cent tax increase on gas far outweighs the grocery tax cut.

The governor pointed to the grocery tax cut and said “the Hall tax cut wasn’t my plan.”

Several audience members made comparisons to surrounding states, both currently and historically, and the phenomenon of raising tax rates having the effect of reducing revenues. 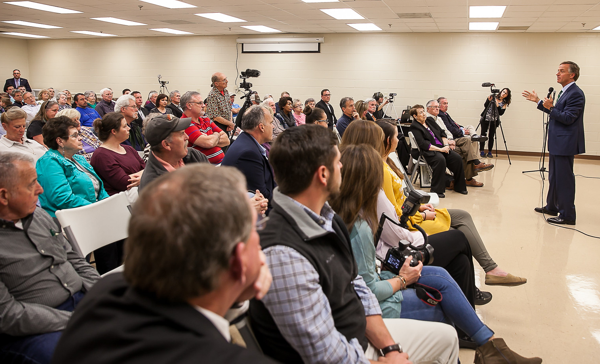 Coffee County resident Lamar Wilkie pointed out that the $4 a month the governor claims the average Tennessean will pay in additional gas or diesel taxes doesn’t address the disparity for those in rural areas who have to drive 30 miles to get a gallon of gas.

The Governor closed the meeting by thanking everyone for coming out.

He noted that next year is an election year, and dealing with the need for more road construction funding will very difficult politically for a new governor, which could push the resolution of the issue six more years down the road.

The governor said he doesn’t “feel right handing this off to the next person in the condition we are now.”

“To get something done, somebody has to stick their neck out to make a proposal to do something hard,” the governor concluded.