They did this, of course, through a new Williamson County Schools Cultural Competency series of videos.

Tennessee Code Annotated Section 49-6-3004 makes it clear that every superintendent of a public school district in Tennessee must submit an in-service training plan that has been approved by the local school board to the TDOE by June 1 of the preceding academic year, and that the Commissioner of Education must approve that plan: (emphasis added)

“In-service days shall be used according to a plan recommended by the local superintendent of schools in accordance with the provisions of this section and other applicable statutes, and adopted by the local board of education. A copy of this plan shall be filed with the State Commissioner of Education on or before June 1 the preceding school year and approved by him.” (emphasis added)

The Tennessee Star asked the Tennessee Department of Education (TDOE) to provide a copy of the in-service training plan for this school year (2018-2019) that, by law, Superintendent Mike Looney was supposed to file with the state before June 1, 2018, as well as a copy of the document that would show the submitted plan had been approved by the Commissioner of Education.

The Star asked the TDOE for this plan through an open records request.

On Wednesday, TDOE officials finally complied — and the only thing they gave us was a calendar outlying days set aside for, among other things, In-service teacher training, holidays, and parent-teacher conferences.

“Please see the below calendar that Williamson County Schools submitted to TDOE for 2018-2019. This is the only record we have responsive to your request,” TDOE’s Nikkie Kiene told The Star in an emailed statement received on Wednesday.

Note that the calendar is merely a simple schedule of event types organized in chronological order beginning on August 3, 2018 and continuing until May 24, 2019. It is not a plan of in-service training, which is a detailed description of exactly what concepts will be taught on each in-service training day, and does not include schedule information for the twelve other event types; Instructional Days, Other Holiday, etc.(emphasis added)

The law clearly specifies that a plan must be submitted, not a calendar. (emphasis added)

You can see that calendar document submitted by Williamson County Schools to the TDOE on May 7, 2018 (and displayed in three parts in this article) here: 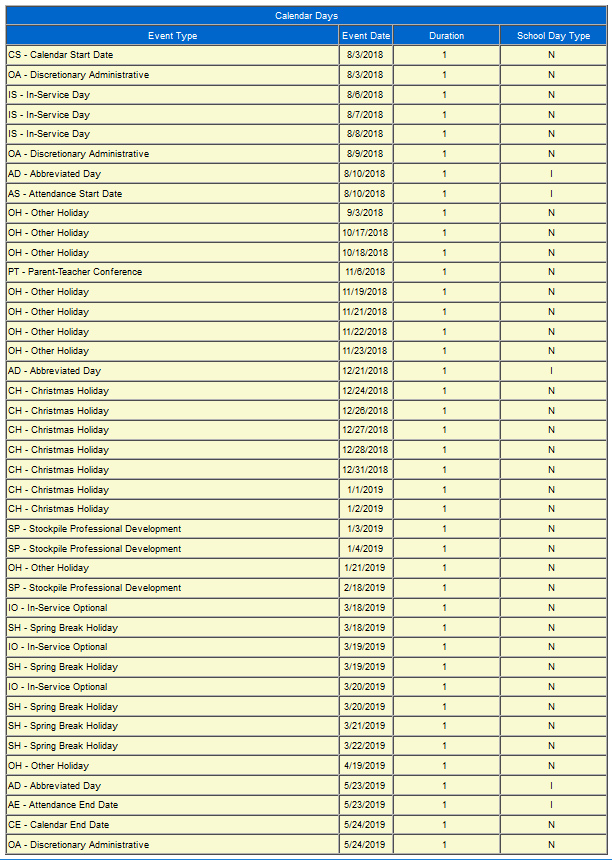 Here is an overall summary of total days by event type in the calendar document submitted by Williamson County Schools to the TDOE on May 7, 2018: 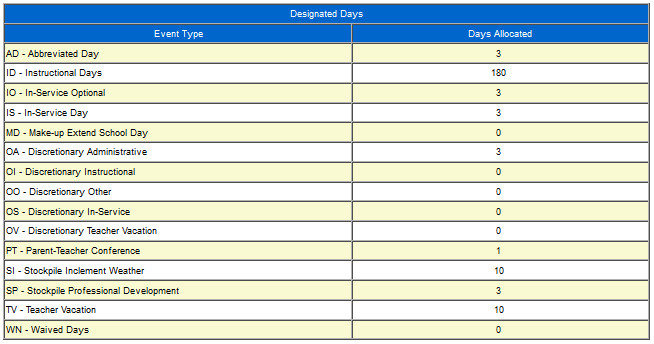 Here is a summary of the timeline of submission and approval of the calendar document submitted by Williamson County Schools to the TDOE on May 7, 2018::

None of what the TDOE handed over had any detailed information about the types of In-service training plans the school system was to carry out or what those training plans would require.

Bottom line, it’s a calendar and not a detailed plan.

According to state law, county school board members were to approve the plan, and Looney was to file it with the TDOE before June 1 of last year.

As The Star reported, school board members refused to comment on the issue earlier this week.

Here’s what we asked of them:

“We are preparing a story with evidence that the Williamson County Schools is currently delivering its white privilege In-Service training in violation of state law. The Tennessee Department of Education has provided documentation that shows you have submitted no such plan but have submitted only a calendar that does not comply with the state law. Can you provide a comment for our story tonight, on deadline by 7 p.m. this (Wednesday) evening?”

None of them returned our messages before Wednesday evening’s deadline concerning whether this plan complies with Tennessee law.

The Star also contacted TDOE General Counsel Christy Ballard Wednesday and asked her about the three kinds of categories as they pertain to in-service teacher training. Those three categories are:

Specifically, we wanted Ballard to define what each of those days meant.

“We are preparing a story with evidence that the Williamson County Schools is currently delivering its white privilege In-Service training in violation of state law. Your department has today provided documentation that shows the Williamson County School System has submitted no such plan but has submitted only a calendar — the aforementioned calendar — that does not comply with the state law.”
“Can you provide a comment for our story tonight, on deadline by 7 p.m. this (Wednesday) evening?”

Ballard did not return requests for comment before the stated deadline of Wednesday evening.

According to the information provided, county school system teachers had regular in-service training days Aug. 6-8. They had Stockpile Professional Development on Jan. 3-4 and again on Feb. 18. The teachers had in-service optional training Monday, Tuesday, and Wednesday of this week, March 18 to March 20.

According to comments made to parents by WCS superintendent Mike Looney, Module 4 appears to have been modified during the past week. A possible time during which this fourth and final module may have been delivered system-wide was Monday, Tuesday, and Wednesday of this week (March 18 to March 20), which were designated as in-service optional days in the Williamson County Schools calendar.

Notably, the delivery of the Williamson County Schools Cultural Competency video series to teachers appears to have also violated that portion of Tennessee Code Annotated Section 49-6-3004, which requires that the in-service plan prepared by the superintendent be “adopted by the local board of education” prior to its submission for approval to the TDOE and the Commissioner of Education.

As The Star reported earlier in this week, we contacted all twelve members of the Williamson County School Board, asking them to provide evidence that the group had approved an in-service plan for academic year 2018-2019, and none of the members responded to that question.

Lacking the presentation of such evidence, it is not unreasonable to assume it does not exist.

As The Star reported last week, in Modules No. 1 and No. 2 of the Williamson County Schools Cultural Competency video series, teachers are told the term “illegal alien” is “oppressive.”

But that’s just one example among many of a leftist, politically correct narrative that school system officials try to drill into their teachers through these videos.

Also, as reported, Module No. 3 tried to indoctrinate teachers on how to teach students about “white privilege.”

The In-service training video, this one 26 minutes in, profiled several people whom the video described as “Williamson County Voices.”

Later, the narrator told viewers “that white individuals do enjoy unearned advantages that society does not necessarily offer to individuals of color.”

Also, as The Star reported, Williamson County officials had the ultimate power to approve an In-service “white privilege” training curriculum for their teachers last month, said Chandler Hooper, a spokeswoman for the Tennessee Department of Education.

– – –
Chris Butler is an investigative journalist at The Tennessee Star. Follow Chris on Facebook. Email tips to chrisbutlerjournalist@gmail.com.