NASHVILLE, Tennessee – For the second time in as many days, Tennesseans rallied at the State Capitol in Nashville on Monday to tell Governor Bill Lee to reopen the state.

About 100 people gathered on the sidewalks in front of and across the street from the Capitol Building, on Dr. Martin Luther King Jr. Boulevard in downtown Nashville, while others drove by honking horns.

Murfreesboro-based DJ Steve Hasty provided music with his elaborate sound system and, acting as emcee for the event, stated repeatedly that it was a rally to reopen Tennessee and not a protest.

After a prayer that asked for reopening, Hasty initiated the chant, “Hey Governor Lee, reopen Tennessee.”

Governor Lee was encouraged to lead the country in the effort to reopen and show that it can be done in a safe way. 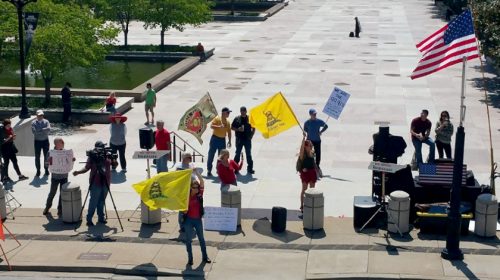 Curtis Carney, owner of Nashville’s Off The Wagon tractor tours, who also spoke at the #FreeTN event, told rally-goers he made the decision Saturday to reopen his business. He said the longer the shutdown keeps going, the more people go hungry.

Carney said Tennessee needs to reopen and it needs to be done now.

A home health nurse named Misty said hospitals are sitting empty and healthcare workers are being furloughed. She called it “gut wrenching,” to see how many people are not receiving care, but said it wasn’t because of the coronavirus.

A man, who later told The Tennessee Star his name is John Colon, recited from memory “A Visitor from the Past.”

The moving and patriotic poem describes a dream and what a Revolutionary War fighter might say about the journey to freedom and liberty, all the ways our rights have been relinquished, gives encouragement to take a stand in defending the Constitution and ends with the dreamer asking what your answer would if the visitor called out from the grave, “Is this still the land of the free and home of the brave???”

Event co-organizer, Chase Williams, a Tennessee Walking Horse trainer, said “I don’t want a handout and I don’t want a stimulus check. I want to go to work.”

Another event co-organizer, Chase Matheson, whose voice was still hoarse from Sunday’s event, wanted to see the restoration of individual liberties. 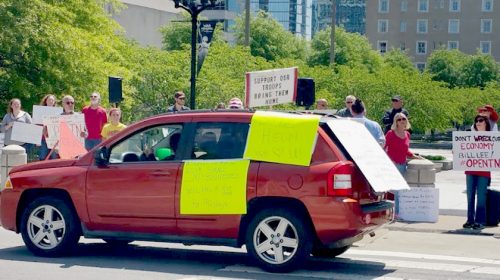 “We are all adults” and “we can take care of ourselves,” said Matheson.

“When government decides they know better than we do, it’s time to shut it down.”

Calling the coronavirus pandemic a “scamdemic,” Matheson called on Governor Lee to do five things:

1. Immediately lift the safer at home orders in the state, including all back-door workarounds used to close restaurants, bars, barbers and other non-essential businesses.
2. Immediately and publicly denounce the governors of states like Michigan, New Jersey, California and our neighbor to the north, Kentucky, who have gone further with the unconstitutional orders than anyone could have imagined.
3. Admit publicly that we were misled with bad models and acknowledge that while the virus is deadly in a small percentage of cases, government’s role should be focused on providing factual information so citizens and business owners can make their own decisions.
4. Encourage and lead by example that no new taxes will arise to pay for the economic catastrophe that he and government started and find a way to pay for it without further burdening citizens. Like a good butcher, they just need to trim the fat.
5. Reaffirm the bill of rights through legislation and in coordination with other government officials to correct a discouraging precedent.

Later Monday afternoon, Governor Bill Lee advised during his daily COVID-19 briefing, that he would not be renewing the stay-at-home order that is set to expire on April 30 and that businesses would begin reopening next week.

“A Visitor From the Past” poem by Thelen Paulk, as published by Freedom Fighters Foundation, can be read here:

I had a dream the other night, I didn’t understand.
A figure walking through the mist, with flintlock in his hand.
His clothes were torn and dirty, as he stood there by my bed.
He took off his three-cornered hat, and speaking low, he said:

“We fought a revolution, to secure our liberty.
We wrote the Constitution, as a shield from tyranny.
For future generations, this legacy we gave.
In this, the land of the free and the home of the brave.

“The freedom we secured for you, we hoped you’d always keep.
But tyrants labored endlessly while your parents were asleep.
Your freedom gone, your courage lost, you’re no more than a slave.
In this, the land of the free and home of the brave.

“You buy permits to travel, and permits to own a gun,
Permits to start a business, or to build a place for one.
On land that you believe you own, you pay a yearly rent.
Although you have no voice in choosing, how the money’s spent.

“Your children must attend a school that doesn’t educate.
Your Christian values can’t be taught, according to the state.
You read about the current news, in a regulated press.
You pay a tax you do not owe, to please the I.R.S.

“Your money is no longer made of Silver or of Gold.
You trade your wealth for paper, so your life can be controlled.
You pay for crimes that make our Nation, turn from God in shame.
You’ve taken Satan’s number, as you’ve traded in your name.

“You’ve given government control, to those who do you harm,
So they can padlock churches, and steal the family farm,
And keep our country deep in debt, put men of God in jail,
Harass your fellow countrymen, while corrupted courts prevail.

“Your public servants don’t uphold the solemn oath they’ve sworn.
Your daughters visit doctors, so their children won’t be born.
Your leaders ship artillery, and guns to foreign shores,
And send your sons to slaughter, fighting other people’s wars.

“Can you regain the freedom for which we fought and died?
Or don’t you have the courage, or the faith to stand with pride?
Are there no more values for which you’ll fight to save?
Or do you wish your children, to live in fear and be a slave?

“People of the Republic, arise and take a stand!
Defend the Constitution, the Supreme Law of the Land!
Preserve our Great Republic, and GOD-Given Right!
And pray to GOD, to keep the torch of Freedom burning bright!”

As I awoke he vanished, in the mist from whence he came.
His words were true, we are not Free, we have ourselves to blame.
For even now as tyrants, trample each GOD-Given Right,
We only watch and tremble, too afraid to stand and fight.

If he stood by your bedside, in a dream, while you’re asleep,
And wonders what remains of our Rights he fought to keep,
What would be your answer, if he called out from the grave:
“IS THIS STILL THE LAND OF THE FREE AND HOME OF THE BRAVE???”

One Thought to “Another Day, Another Rally Telling Governor Bill Lee to Reopen Tennessee”