ROTONDA WEST, Florida – More than 36 hours after the devastating Category 4 Hurricane Ian made landfall in southwest Florida, a Star News Network reporter trekked to the rural town of Rotonda West to do a wellness check on his parents, who live in the sprawling community.

The deed-restricted community of Rotonda West, located in Charlotte County, spent approximately eight hours inside the eyewall of Hurricane Ian on Wednesday as the storm moved slowly northeast towards Orlando and later Jacksonville.

A video of the storm taken by a local resident was broadcasted by ABC News:

Video shows the eyewall of Hurricane Ian around Rotonda West, Florida on Wednesday.

The sleepy community lost all contact with the outside world and is without electricity, cell phone service, and running water.

This Star News reporter went on a search for his parents Friday morning.

I had not heard from my parents since the worst of the storm hit Wednesday night, so I took to I-75, which runs north and south in Florida.

Beginning in Tampa, I drove southbound on the highway for about two hours to the town of Englewood.

The drive on the interstate was easy, but what awaited upon exiting the freeway was anything but easy.

The Englewood exit leads to River Road. It’s about 20 miles from the exit to Rotonda West. True to its name, it is flanked by a river. That river flooded.

I immediately encountered about a foot of flooding in the roadway, making the road impassable by car. The only vehicles that could pass were large trucks. I pulled over into a gas station parking lot just off the exit, which served as a sort of makeshift staging area for people like me – looking to move further west.

The gas station was destroyed.

There, I encountered a man driving a large pickup truck, who was headed to Gasparilla Island to check on his own vacation home.

I asked if he would take me to Rotonda West, and he obliged. He specified, however, that he would drop me at the edge of the community, which is, in essence, a giant circular maze. 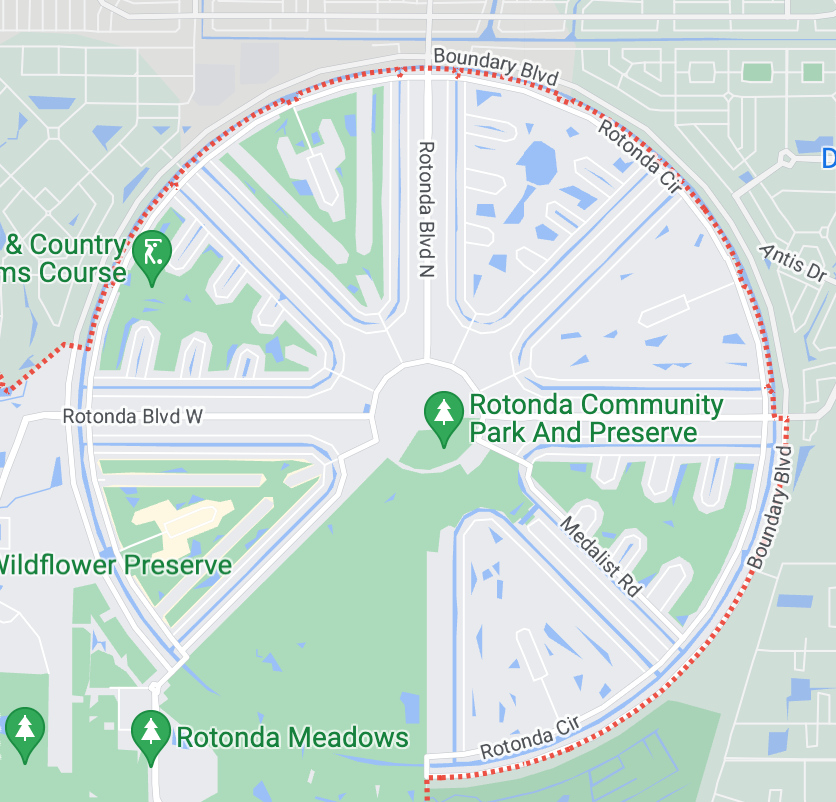 After we drove slowly through the flooding, oftentimes stopping to let oncoming traffic use the center of the road, where the water was more shallow (those motorists eventually yielded to us, making the ride a zig-zag from the shoulder of the two-lane road to a straddle of the double yellow center line) the good samaritan, whose name I never caught, dropped me at the southwest edge of Rotonda West.

Cell towers are down across the region. I lost service shortly after hopping into the truck.

That meant no GPS to guide me through the maze. My parents live in the southeast portion of the town, which might sound like an easy walk as the crow flies.

But one cannot walk through the maze as the crow flies. That would require trekking across private property, much of which was filled with downed power lines, downed trees and debris.

So I walked straight, hoping to find something I recognized.

The conditions were pleasant Friday. Sunny about 65 degrees, with a cool fall breeze that is atypical in that region for September. Usually it’s much warmer, and the coolness was a welcomed gift to the residents who cannot use their air conditioners.

It was not an unpleasant walk, but for the destruction I witnessed.

After about an hour of walking, an older couple in an Infinity SUV pulled up alongside of me.

They asked where I was headed. I told them I didn’t know exactly, but gave them the name of my parents’ street.

They knew it vaguely. Rotonda West is a massive community with thousands of homes. I suspect one could live there for years and never see the whole thing.

In any case, they drove me to the vicinity of my parents address, until I recognized enough of the landscape to guide them the rest of the way.

They dropped me off, and headed on their way. Neither motorists who picked me up would accept cash for their troubles. The sense of community during a time of catastrophe was palpable.

My parents were not home when I arrived. Conveniently though, they left a note on the front door in case I paid them a visit. They had no prior notice that I would come to town, as we could not communicate by phone. 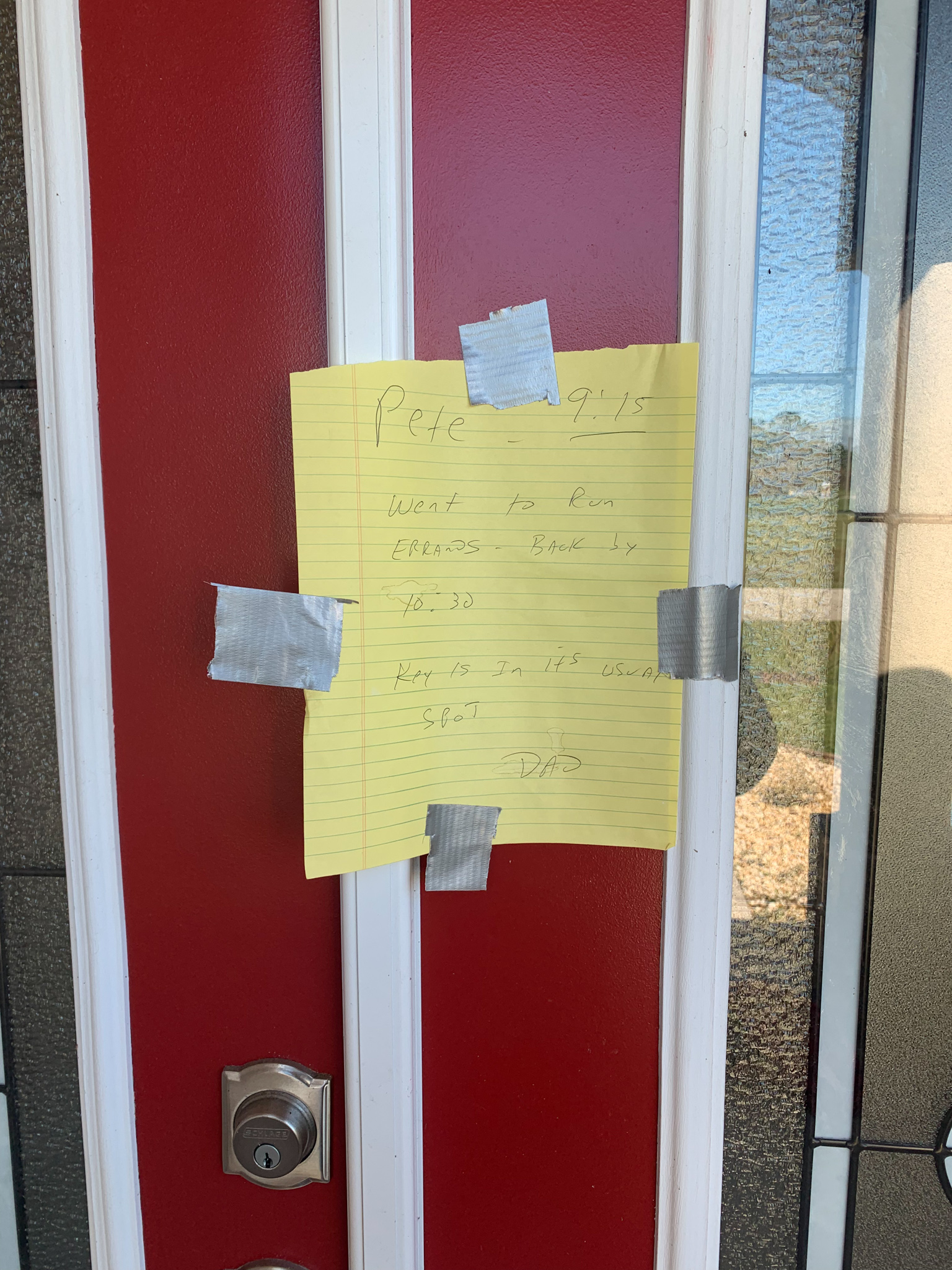 I arrived at about 10:30am, when the note said they would be back. I surveyed they damage while I awaited their return.

My parents fell into the category of “very fortunate.” They were missing some shingles, and a couple of the rooms in the house took on water that seeped through the ceiling during the storm. Other than that, their house was intact.

They arrived about 30 minutes later, healthy (thank God) and surprised to learn that I had hitchhiked to them.

Without access to the internet, they had no idea just how badly the hurricane had hit neighboring communities. I explained to them that Ft. Myers was essentially gone, and that Venice had been rocked by the storm.

I got the sense that people in Rotonda West, without power, water, or cell service, looking at the devastation in their community – and it was catastrophic – did not yet understand that they got off relatively easy compared to some of the nearby cities and towns.

I also got the sense that their community had not yet received much support from local and state officials like many of their neighbors have, likely because those resources are tackling the most devastated towns first.

My dad later drove me back to my parked vehicle in his truck, which was just high enough off the ground to weather the flooding.

Much like the aftermath of Hurricane Katrina, I suspect that southwest will take years to fully recover from Hurricane Ian.

Mine was a success story. Many others are still desperately searching for loved ones. Please pray for them.