After a report exposed Vanderbilt University Medical Center for performing and bragging about performing gender transition surgeries for minors, and after a letter from Tennessee state legislators, the hospital has agreed to cease all such medical procedures.

“HUGE NEWS: following our report, Vanderbilt has agreed to pause all gender transition surgeries on minors,” said Daily Wire’s Matt Walsh, who first exposed the medical center. “The fight is far from over but this will save children from mutilation and abuse. An incredibly important victory. Praise God.”

UPDATE: here is the letter Vanderbilt sent to state legislators. Notice the wording at the end. They promise to comply with whatever regulations are imposed. They’ve already conceded the legislative fight. This win is even bigger than we thought. pic.twitter.com/VkKhuiHTUO

He attached a letter from the medical center addressed to State Rep. Jason Zachary (R-District 14), which stated in no uncertain terms that Vanderbilt will halt gender transition surgeries for minors.

“You have asked VUMC to permanently halt gender affirmation surgeries being performed on minor children,” says the letter penned by C. Wright Pinson, VUMC’s Deputy CEO and Chief Health System Officer. “On September 6, 2022, [World Professional Association of Transgender Health] published a new version of its recommendations to health care professionals for treatment of transgender persons, known as SOC-8. In light of these new recommendations, and as part of completing our internal clinical review of SOC-8 guidance in patients under 18, we will be seeking advice from local and national clinic experts. We are pausing gender affirmation surgeries on patients under 18 while we complete this review, which may take several months.”

The letter also says that if the General Assembly bans transition surgeries for minors, the medical center plans to comply with the law.

Zachary wrote the following in his original letter:

While those 18 years and older are recognized as legal adults and free to make decisions in their best interests, it is an egregious error of judgment that an institution as highly respected as Vanderbilt would condone (and promote) harmful and irreversible procedures for minor children in the name of profit.

The Vanderbilt Pediatric Transgender Clinic’s practices qualify as nothing less than child abuse,” the letter says. “Further, we are appalled that these reports demonstrate threats by Vanderbilt personnel to take adverse action against employees who are contentious and religious objectors to genital disfiguring and double mastectomies of children.

Initially, Walsh posted a video in which Shayne Taylor, M.D., an assistant professor of medicine, bragged that sex change surgeries are lucrative for the hospital.

And this is only including top surgery. This isn’t including any bottom surgery. And it’s a lot of money. These surgeries make a lot of money. So, female to male chest reconstruction can bring in $40,000. A patient just on routine hormone treatment who is only seen a few times a year can bring in several thousand dollars … Now these are not from the internet. But it’s from the Philadelphia Center for Transgender Surgery, which has done a lot of surgery for patients. I just want to give you an idea of how much bottom surgeries are making. 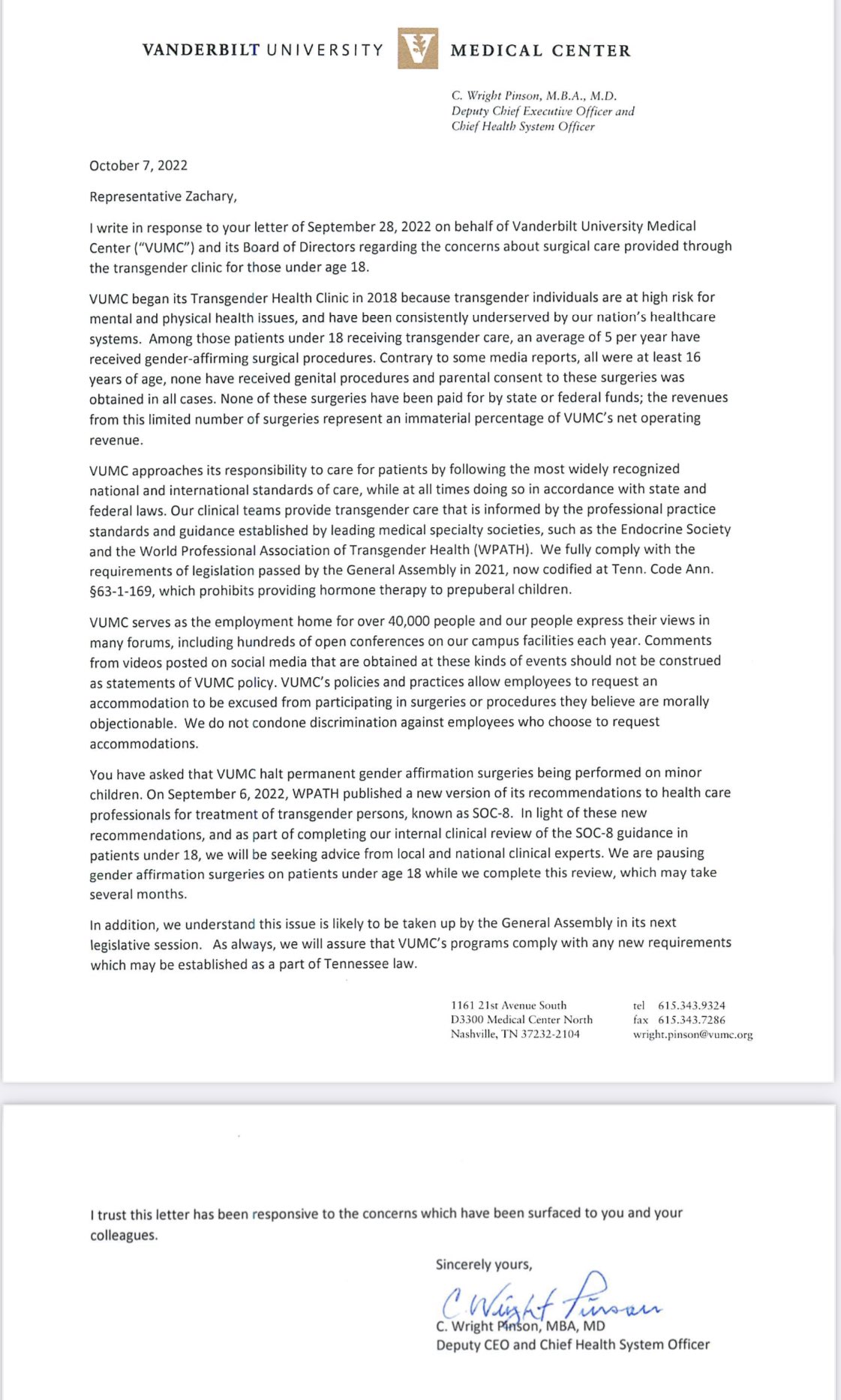